The coast of the trulli

between sea and tradition

What to see in La costa dei trulli?

The Murgia dei Trulli is a subregion of the Murgia, generally coinciding with the south-eastern part, located between the south east of Bari, the upper Brindisi area and the upper Taranto area, dividing the three provinces almost equally. Inside we find the Itria valley. 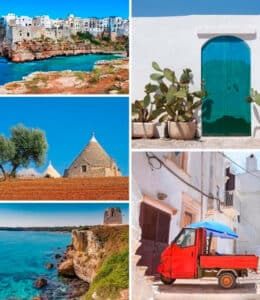 The homonymous Murgia dei Trulli was used for the first time in 1908 by professor Carlo Martelli; as was easily understood, thanks to the exclusive numerous presence of the trulli, from birth to development.

In fact, it is only in this area that they are livable and still inhabited in the countryside today. But in addition to these, its irregular shape of the ground often interrupted by intact woods and woods, its limestone composition with the use of stone extracted on the buildings (in particular dry stone walls) and the particularly healthy air, clearly distinguish this area. ; not for anything else in the course of the last centuries it has had a more distributed rural development and great growth of summer tourism in the last decades compared to the rest of the Murgiana area

The Costa dei Trulli is becoming one of the favorite destinations for Italian tourists and beyond.

For some years now, the Costa dei Trulli in particular and Puglia in general have become synonymous with tourism, and this has turned the spotlight of the international press, increasingly interested in this area. Puglia, as is known, is a multifaceted reality: there is Salento, there is the Gargano area, but there is also the Costa dei Trulli, unique in its kind and, especially in this last period, very loved by tourists from all over the world. This is thanks to several articles that have appeared in the international press, among which the one published in Traveler, section of National Geographic, entitled Puglia: Life on the Heel, published in the name of Julia Buckley, stands out.

Choose your home! to sleep near the Costa dei Trulli in a B&B with swimming pool.

The flavors of the Costa dei Trulli lands bring back, in their essence, to the dominations that have followed one another, as well as to the peasant origins of the area, which determine the inevitable use of the fruits of the earth and the fishy sea on which many villages stretch out.
The tomato, the wheat, but also the chicory, the legumes, the turnips, allow to obtain dishes with an intense flavor, made even more typical by the precious extra virgin olive oil that is produced in these areas. Vegetable dishes are combined with strong ricotta and burrata, lamb and horse meat, lots of blue fish, crustaceans and molluscs.
The desserts reproduce the flavors of history, such as tarallini with glaze, of clear Arab origin, mustaccioli, aromatic and rich in dried fruit, of oriental derivation, pitteddhre with grape mustard.

The splendid beaches, the blue sea and the rugged and rugged coast constitute the trait d’union between the centers of the Costa dei Trulli. Fish, crustaceans, molluscs can only become a privileged dish in the local cuisine.
Fish soups, roasted or stewed octopus, mussels and fried foods are a must. The basic foods with which the typical dishes of the Costa dei Trulli are prepared such as ciceri and tria, fae and fogghie, fried muersi come from the countryside behind, characterized by olive groves, wheat and vines.
But there is no shortage of orecchiette with turnip tops, chops from Bari, lampascioni, friselle and onion calzone, specialties to be accompanied, preferably, with the excellent local wine, such as Primitivo or Ostuni DOC nectars.

Do you want to taste the typical dishes of the Costa dei Trulli cuisine? book your table now!

What to do in La costa dei trulli?

The formidable attractiveness of this stretch of the heel of Italy (awarded with 5 blue flags) and the extraordinary international recognition of the trulli, represent the pillars of the Costa dei Trulli project which naturally also concerns other territorial realities that will gradually be involved. 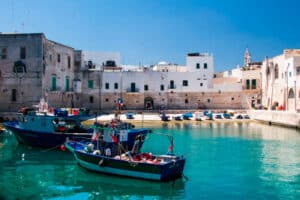 Do you want to visit the Costa dei Trulli and save on the price of the B&B? Check our availability and ask for a discount!

Where to sleep in La costa dei trulli?

Visit our Bed & Breakfast at the Costa dei trulli where to stay in order to visit it.

Costa dei Trulli is an ever-growing reality. This synergy between municipalities capable of communicating with each other, overcoming parochialism and enhancing the beauty and culture of the places all together. An opportunity for the whole area and for those who experience it every day of the year, as well as a phenomenon of attraction for tourists who can enjoy a wide range of events scattered throughout the area and diversified.

Visit our B&B in the Costa dei trulli where to stay in order to visit it.