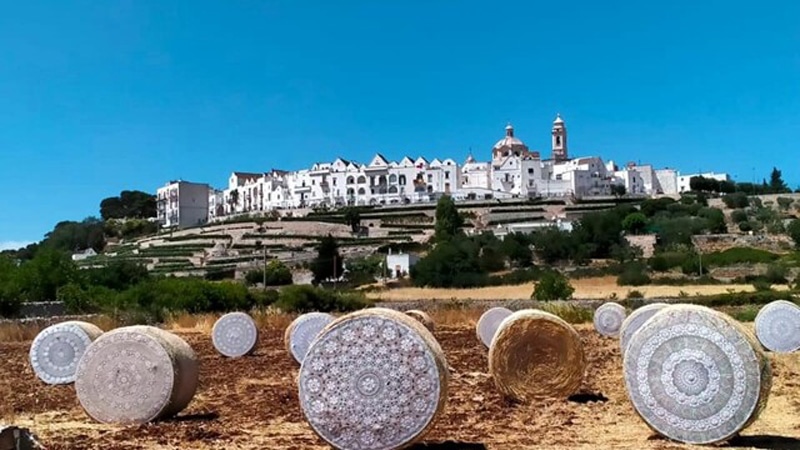 Between shining white and flowered balconies. Inserted in the list of the most beautiful villages in Italy, the city appears perched like a lighthouse on the plateau of the Itria Valley.

Where is Locorotondo located?

Locorotondo borders to the north with Fasano (BR) and Alberobello, to the west and south with the territory of Martina Franca (TA).

The history of Locorotondo:

The historic center of Locorotondo, awarded with the Orange Flag of the Touring Club for the harmony of shapes and the ease of use of the historic center, is a unique monument of charm and enchantment with its whitewashed houses, cobbled alleys, elegant portals and flowered balconies. Next to the trulli, the city of Locorotondo is represented by the so-called “cummerse”, small geometric-shaped houses with sloping roofs, whitewashed and now restored and offered to tourists as original accommodations, scattered around the historic district, one of the first widespread hotels in the area. Located in the historic district.

What to do in Locorotondo?

Prepare your taste buds for a trip to the Itria Valley … between one taste and the next, to discover typical dishes among the flavors of this land!

Traveling is also typical eating. To live the experience of getting to know a new place, you have to taste the typical dishes, we are convinced of this.
New flavors, new recipes, delightful preparations: the discovery of the world passes very often on the palate!
So here we are ready to suggest our restaurant to try the typical dishes of Locorotondo. Why visit Locorotondo historic center?
Locorotondo, is the village of the “cummerse” that is the sloping roofs covered with limestone slabs called chiancarelle. Tradition and art are the main features of this city, where rustic houses are combined with Baroque churches and historic buildings. Locorotondo is a city where everything is taken seriously and modernity is avoided whenever possible.

What to see in Locorotondo?

Chosen as a set of films including My brother-in-law with Sergio Rubini, Life is like this with Aldo, Giovanni and Giacomo and Baciami piccina with Vincenzo Salemme, Locorotondo is a charming village not to be missed on a journey to discover the Itria Valley.

What to see in the guided tour of Locorotondo? Locorotondo is a multitude of welcoming corners, small eyes, breathtaking views and streets of small arches that are like little jewels in the eyes of the visitors of the village. They enclose jewels whose thousand facets can be admired as soon as you cross Porta Napoli.

Locorotondo stands out on the Murge dei Trulli plateau with the charming circular town with its characteristic white houses.
Among the most beautiful villages in Italy and the Orange Flag of the Italian Touring Club, Locorotondo is perched on a plateau in the south-eastern area of the Murge dei Trulli, in the heart of the Itria Valley, less than 10 km from Alberobello.

The village takes its name from the characteristic circular shape of the historic center, built around the year 1000 and consisting of a group of huts built by peasants on a hill, the typical “cummerse” (small houses with sloping roofs).

Do you want to visit Locorotondo and save on the price of the B&B? Check our availability and ask for a discount!

The traditional cuisine of Locorotondo is a vivid expression of the healthy principles of the ancient Mediterranean diet. The gastronomic tradition preserved in Locorotondo is that of a traditional and peasant cuisine, which constitutes a large part of the cuisine of the region. On the whole, peasant nutrition followed the rigid and necessary rules of the harsh social reality of the poorer classes. Knowing the basic ingredients, you can learn the recipes of local dishes. Wheat is the first of these.

The wide use of wheat, in the soft and hard varieties, is widely ascertained in country cooking, both in the packaging of homemade pasta, both in the preparation of homemade bread and exquisite focaccia and both directly as in the ancient recipe called: U Rijène Spugghiète. With the soft wheat flour the bread is prepared and with the bread dough the excellent friselle, the fragrant focaccia (a jarie de furne in the tomato, oil and oregano version and in the one with coarse salt and oregano) with the addition of potatoes. boiled buns stuffed with onion porraia (spunzèle) are prepared.

Always with soft wheat flour, tradition hands down the sweets of the great holidays: the ficazze fracete (pasta bundles, stuffed with quince jam and grapes, baked in the oven), boiled tarallini and large Easter egg taralli wrapped in very sweet giulebbe (scehppc), crispy wrapped and soft pettole sprinkled with honey or fragrant sapa (mirecuitte) already used by the Latins mixed with fresh snow. A curiosity: for the joy of the little ones on the occasion of Easter a cake was prepared with the pasta of the egg taralli, a braided donut, in which one or more fresh eggs were inserted and then baked in the oven and covered with multicolored juleps and grains, the so-called curruculu, with a dark etymology.
Three types of flour are still used in the packaging of homemade pasta: durum wheat semolina, wholemeal flour (‘u rîusse) and soft wheat flour in addition to the others. The commonly used pastas are: tagliatelle (a sagne) tasted with meat sauce or with cod sauce or with chickpeas; cecolini (frecidde) cooked mostly with legumes; the very particular tridde, typical of the south of Bari.

Do you want to taste the typical dishes of Locorotondo cuisine? book your table now!

U TRIDDE, a rare case in local gastronomy, seems to belong to the opulent bourgeois cuisine of some time ago, at least for two very good reasons: the richness of the ingredients and the particular occasions in which the dish was prepared.
Triddo, otherwise known as Maltrito, is a homemade pasta that is the result of a long and meticulous preparation. Some whole eggs are mixed with durum wheat semolina, and some generous spoonfuls of grated local pecorino (for those who don’t like it, Parmesan), add a copious handful of finely chopped parsley, salt as needed. The dough should be worked slowly, without adding water and should be soft but consistent, then with a jalanère (a kind of rolling pin) roll out a thin and porous sheet. Left to dry for some time, with a lot of patience, tiny and uneven pieces are detached from the pastry which will be left to dry for another time and then cooked normally, finally seasoned with good hot turkey broth and sprinkled with grated cheese.
In the past, this singular dish was consumed on certain occasions; sad, cheerful, sacred: Christmas, Easter but especially, according to the testimonies of the elders, the triddo, due to its substantial delicacy, was particularly suitable for quinzo (from the Latin conso, consolatio: the frugal meal offered by friends or acquaintances to the heartbroken relatives of the deceased). But there were also happy occasions to prepare the tríddo: certain seems to be the ancient custom of offering the puerpera, after a recent and happy childbirth, a plate of the exquisite and delicate dish, however, seasoned with the broth of two doves generously donated by the godmother of the unborn child.

A CIALLÉDDE. It is a dish of poor peasant cuisine of yesteryear, but the fact of being nutritious, light and fresh makes it extremely current. It evokes forgotten aromas and flavors, making it suitable for summer evenings. Cold water is poured into a large bowl, and tomatoes are crushed, small and sweet, a tender stalk of chopped celery, an abundant pinch of solar oregano, salt as required; optional are pepper or chilli and garlic. Stir everything, then put some stale and previously chopped homemade bread into the cup and stir slowly again so that the bread can absorb the tasty concoction in which we will pour a substantial amount of extra virgin olive oil, obviously raw, last.
All that remains is to mix a little more and … enjoy your meal!

GNUMERÈDDE SUFFUCHÈTE. The fact that animal entrails were a culinary delicacy shouldn’t make the incredulous people turn up their noses; in fact it is well known, since classical antiquity, how much our Greek cousins loved animal offal; for this reason when they sacrificed the sacrificial victims (cattle and sheep) to their gods, as soon as the tender beast was gutted, they roasted the still steaming viscera on hot coals consuming them greedily, while ironically, they let the rest of the carcass burn.
The suffuchete gnumerèdde are prepared with tripe, and entrails of adult lamb (agnellone), reduced in small portions wrapped in a box of tripe and tied like a ball of a segment of guts (in fact gnumeredde means precisely ball, roll); some parsley leaves are inserted inside.
Today the rolls are no longer prepared at home, but can be bought in the many butchers of the town, cleaned and prepared in a workmanlike manner; obviously booking them well in advance, given the huge demand.

Do you want to taste the typical dishes of Locorotondo cuisine? book your table now!

Where to sleep in Locorotondo?

Choose your home! to sleep near Locorotondo in a B&B with swimming pool.