Where is Alberobello located?

Alberobello is a municipality located in the south-eastern part of its metropolitan city of belonging (BARI), not far from the Itria Valley and the Murgia hills.

What to see in Alberobello?

The history of these very particular buildings is linked to the pragmatic de Baronibus, a fifteenth-century edict of the Kingdom of Naples that subjected every new urban settlement to a tribute. Conical-shaped buildings that can be destroyed by removing a single stone and can be rebuilt in a few hours. 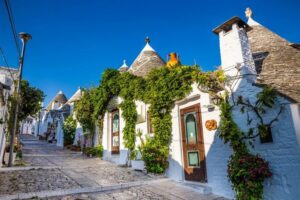 The Counts of Conversano, the Acquaviva D’Aragona owners of the territory on which Alberobello stands today with the summer domus which was called Difesa De Le Noci on the border with the territory of the Duchy of Martina Franca from 15 May 1481, they then imposed on the farmers sent to these lands for reclamation and cultivation of new land to build their houses dry, without using mortar, so that they could be configured as precarious and not, at least formally, buildings to residences belonging to a permanent urban settlement, in order to exempt it from the tax.

Peasants believed that the circular or square domed roof with overlapping stone rings was best. The roof was adorned with decorative pinnacles, whose shape according to many represented the signature of the craftsman who had built (or rebuilt) the trullo, inspired by symbolic, mystical, religious or secular elements dating back to the Fascist era. The laying of the top was a solemn moment. 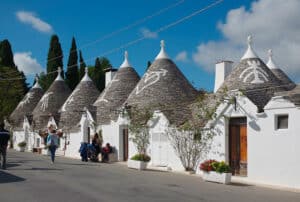 One of the largest trulli in Alberobello, overlooking the Sacramento square, is fourteen meters high. Nicknamed Sovereign Trullo by the local scholar Giuseppe Notarnicola, it was originally a simple country trullo. By the owners of the Perta family in the second half of the 18th century, it was considerably enlarged and finished with a notarial deed on Saturday 15 April 1797 in which it certifies that the trullo was built with the use of mortar and therefore in violation of the de Baronibus pragmatic. It was the seat of the Confraternity of the Blessed Sacrament from 1826 to 1837, when a painting of Calvary by an unknown artist was depicted near the entrance. It was also the seat of the first pharmacy in Alberobello held by Stefano Chiarelli. It was acquired by the current owners in 1861. In 1923 it became a National Monument and in 1928 the pavement of the square was built. Since 1994 it has been used as a museum house.

During the summer, the Trullo Sovrano hosts theatrical performances, concerts and other cultural events.

Here are all the typical dishes of the town of Alberobello. First, second, desserts, sausages, wines, cheeses: recipes unknown to most, but of excellent quality.

The traditional cuisine of Alberobello brings with it the testimonies of a poor and simple peasant land. But this does not mean that traditional dishes are simple in taste, on the contrary!

If you are in Alberobello you can eat the typical fresh Apulian pasta such as orecchiette, cavatelli or capunti, seasoned with turnip tops, garlic, anchovies and fried breadcrumbs. A typical first course of Alberobello is also lasagna with cod, called cr´sciàul in the local dialect.

While browsing the menus of the restaurants in Alberobello you will find many recipes based on chicory, onions, peppers, thistles and purple artichokes. These vegetables are never lacking in accompanying Apulian main courses. The dishes based on vegetables and meat are the ones that most distinguish and identify Alberobello but the sea is not far away so you can also order typical Apulian fish dishes such as breaded and fried mussels.

If your tummy is not yet full, order the dessert, in particular I recommend the pettole, leavened dough pancakes that are served dipped in honey or sprinkled with sugar. They are a typical Christmas dessert and you could try them on the occasion of a winter holiday in Alberobello. Among other things, Alberobello is beautiful at Christmas, there are always a lot of events that make the city of trulli even more magical, read here!

Do you want to taste the typical dishes of Alberobello’s cuisine? book your table now!

What to do in Alberobello?

The district of Rione Monti is made up of 1030 trulli. These are lined up along the edges of eight irregular streets that proceed towards the top of the hill, on the top of which stands the church of Sant’Antonio da Padova, also in the shape of a trullo. Here there are trulli of all kinds, the best known however are the Siamese Trulli, joined at the top but with entrances that open onto two different streets. Once connected by an external door, it is said that they were separated following a feud between two brothers, in love with the same girl. Many of the trulli in this area are home to small shops and artisan shops where you can do some shopping.

To admire the Rione Monti from above and enjoy a spectacular panorama just go to Alberobello center, in Piazza Gian Girolamo D’Acquaviva D’Aragona, here is the Belvedere roof terrace or Terrazza di Santa Lucia, made public to visitors in the 90’s.

Rione Aia Piccola is an area that includes 400 trulli, almost all of which are inhabited. A perfect place to immerse yourself in the atmosphere of the old medieval village since, compared to other areas of the city, it is the only one that is not overrun by commercial activities. In this area stands the Trullo Sovrano, a two-storey trullo with a huge facade. Today it is a house-museum with paid admission that you can visit to admire the furnished rooms and the Mediterranean garden.

Between Aia Piccola and Piazza del Popolo rises Casa Pezzolla, a unique architectural complex of its kind, made up of 15 communicating trulli. Today it is the seat of the Museum of the territory, ideal for those who want to learn about the culture of the area by discovering the main productive activities of the area and admiring the typical furnishings of a peasant-era trullo. Between one district and another, a stop in one of the city’s trullo restaurants is a must, to taste local delicacies such as orecchiette with turnip tops and taste the typical products of the area.

For those who want to live a truly special and unique experience, the advice is to book a guided tour to discover the secrets of this fantastic location, admire the trulli from the inside and taste some typical products, such as extra virgin olive oil. .

Visit our Alberobello Bed & Breakfast where to stay in order to visit it.

The history of Alberobello:

Origins of the name
The historian Pietro Gioia has conjectured that the name Alberobello derives from Silva alboris belli, with the meaning of “forest of the war tree” and this derivation, devoid of documentary confirmation, has long been endorsed by later historians. Later studies, however, underline that the first toponym with which the locality was known was Silva Alborelli: this is the result of the oldest document known to scholars, namely the investiture diploma of 15 May 1481 with which King Ferrante d’Aragona assigned the properties of the late count of Conversano Giulio Antonio I Acquaviva d’Aragona to his illiterate son Andrea Matteo. In this document we read Silva Alborelli in the province of our Terra Bari.

However, until the nineteenth century the alternative terms Arborebello or Albero Bello were also adopted.

A first anthropization of the area began only in the early sixteenth century on the initiative of the Count of Conversano Andrea Matteo III Acquaviva d’Aragona, son of Giulio Antonio Acquaviva who fell in the summer of 1480 in the battle of Otranto against the Ottomans. Andrea Matteo introduced about forty peasant families from the fiefdom of Noci to reclaim and cultivate the land, with the obligation to give him the tithe of the crops.

His successor, Count Giangirolamo II, known as Guercio delle Puglia by nineteenth-century historiansand because from a struggle he obtained a bandaged eye (without documentation) in 1635 in the center of the area he erected an inn with adjoining refectory, tavern and oratory dedicated to the Madonna di Loreto (it is celebrated on December 10) and to Saints Cosma and Damiano (who it was closed by the public in 1863), which started the urbanization of the forest with the construction of an agglomeration of small houses. The abundance of material, especially limestone and karst stone and the Count’s authorization to build houses only with dry stone walls without the use of mortar, which became the characteristic trulli, contributed to the expansion of the urban agglomeration. The obligation to have houses built only with dry stone was an expedient of the count to avoid paying taxes to the Spanish viceroy of the Kingdom of Naples according to the Pragmatica de Baronibus, a law in force until the eighteenth century according to which the construction of a The new inhabited center entailed in the first place the royal assent and the consecutive payment of taxes by the baron to the Royal Court. The inhabited center was built on the streets of the ancient Cana / Cane river, where the large Giuseppe Martelotta now stands.

Alberobello remained a fief of the Acquaviva d’Aragona of Conversano until Saturday 27 May 1797, when King Ferdinand IV of Bourbon accepted the request of a delegation-committee of seven gentlemen, and issued a decree with which he elevated the small village to a royal city , freeing her from feudal servitude. The decree arrived in the village on the following 16 June and was posted on an elm tree for all to see. On June 22, physicist Francesco Giuseppe Lippolis nicknamed “False Ears” was elected as the first mayor. On 16 March 1814 the parish was established and Don Vito Onofrio Tulio Lippolis, cousin of the first mayor, and archpriest of the Chapter made up of about twenty presbyters, was appointed first parish priest. In the summer of 1797 Antonio Francesco D’Amore built the first two-storey trullo, known today as Casa D’Amore.

Alberobello is the only inhabited center in which there is an entire district of trulli, therefore it is considered the cultural capital of the trulli of the Murgia.

Visit our Alberobello B&B where to stay in order to visit it.

Where to sleep in Alberobello?

Choose your home! to sleep near Alberobello in a B&B with swimming pool. 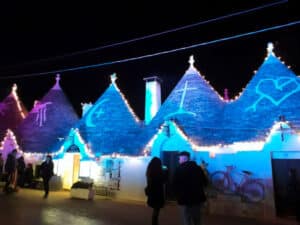 Alberobello is a city in Puglia, Italy. It is known for the Trulli, white conical stone buildings, present by the hundreds in the hilly district of Rione Monti. The 18th century Trullo Sovrano is a two-level trullo. The “Casa Pezzolla” Territory Museum exhibits furnishings and tools that recreate life in the Trulli as it was in the past. To the south-west of the city is the Red House, a World War II internment camp.

Do you want to visit Alberobello and save on the price of the B&B? Check our availability and ask for a discount!