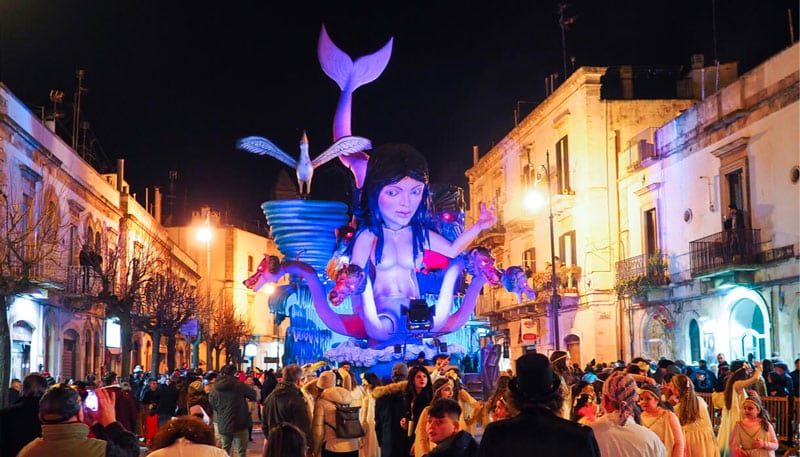 It is known for the ancient Carnival, for the textile manufacturing companies and for the karst caves.

Where is Putignano located?

What to see in Putignano?

The Apulian city is famous for its carnival. The Putignano carnival is the oldest in Europe and in 2020 it will celebrate its 626th edition. Its origins are very ancient, dating back to the time when the city of Putignano was chosen as a place for the transport of relics. The tradition of the allegorical procession through the city was born only at the time of Fascism. The Putignano carnival begins on January 17, the feast of Sant’Antonio Abate, and ends with the beginning of Lent.

Visit our B&B in Putignano where to stay in order to visit it.

Homeland of the good life, Putignano is a city that relaxes in its alleys, enchants in its cellars and warms at the table.
Tradition, simplicity and typical ingredients are the basis of a cuisine that can go far beyond the simple task of filling the stomach. Its cuisine transmits a long peasant tradition, portrays a proud and proud people and revives the fruits of a sunny land in the senses.

Among the typical dishes of Putignano, various specialties of the legendary Apulian cuisine: orecchiette with turnip tops, broad beans and chicory, wheat with oil and cheese, bread balls, classic or donkey chops and lamb with potatoes, are just some of the specialties proposed in the restaurants of Putignano.

Farinella is an ancient peasant food and is still made with barley and chickpeas expertly roasted and reduced to wholemeal flour with the addition of a little salt. But originally it was made only with barley. In the last decades of the 1700s, that obtained from black chickpeas was also used, they were, in fact, more crumbly than the white ones.

For many generations of farmers, together with dried figs, it was the only lunch eaten during the hard work in the fields. The same was kept in a canvas bag called the Putignanese dialect “U’VOLZ”, and was eaten in powder accompanied not only by dried figs but also by edible herbs and wild onions found.

Lords, builders and merchants used farinella in pasta sauces, on well-seasoned vegetables, on boiled potatoes mashed with the tip of the fork and seasoned with olive oil and salt, in equal parts with extra virgin olive oil and water, on fresh figs in brine, on cherries, on grapes. They were mixed with ripe olives, peeled and cut into small pieces and finally used as a dessert in water or water and sugar. For children it was prepared with water, sugar and a few drops of olive oil.

Visit our Bed & Breakfast in Putignano where to stay in order to visit it.

What to do in Putignano?

Putignano stands on a hill in the Murgia, the Apulian plateau of karst origin. This position is ideal for the presence of caves full of mystery and charm, which are located a short distance from the historic center.

The most famous of these, known as Grotta del Turullo, was the first place visited by tourists and when it was discovered on May 29, 1931 during the construction of a sewer, it quickly became a popular attraction for the curious. The reflection of the water emanating from the limestone and aragonite inflorescences makes the Trullo caves appear like a starry sky in natural light.

The visit to this cave starts from the trullo, which serves as an information point. From this point, a spiral staircase descends for over 12 meters, beyond which begins a flat walkway that allows you to fully admire the stalactites and stalagmites. Being 20 meters deep, the temperature is cool even in summer, so comfortable shoes and layered clothing are recommended.

Choose your home! to sleep near Putignano in a B&B with swimming pool.

The history of Putignano:

Putignano would have taken origin from an ancient Peuceta center. Numerous archaeological finds testify to this, such as vases, coins and weapons found in ancient tombs. It is widely believed that it flourished during Magna Graecia and later became a municipality of the Roman Empire, but there is no evidence for it. Over the centuries the center fell into decline.
Around the year 1000 the Putignano area became the property of the Benedictine monks of the monastery of Santo Stefano in Monopoli. Since then the Putignano area has been inhabited by small farmers in the service of the Benedictines. Over the years, the population has gradually increased and over the centuries a small agricultural center has developed.

Some events related to Frederick II of Swabia date back to the Benedictine period. He loved to hunt in the Bari area and also had a residence in Gioia del Colle. He was also so attached to Putignano that he built a castle near the town. The population of Putignano refused to let the emperor into the city on the advice of the Benedictines, who sided with the Pope excommunicating him. From that moment his feelings for the city turned into hatred for the infidelity he suffered and he destroyed the castle, of which today there is no trace and the walls are badly damaged.

Frederick II’s anger was further exacerbated by the struggle of the Bishop of Conversano to obtain ecclesiastical jurisdiction over the territory. However, for a long time Putignano, like its neighbor Rutigliano, enjoyed the status of ecclesia nullius diocesis, not belonging to any diocese but being in direct subordination to the Holy See.

Where to sleep in Putignano?

Do you want to visit Putignano and save on the price of the B&B? Check our availability and ask for a discount!

As in other Italian villages, the historic center of Putignano has numerous buildings of incomparable beauty, such as the Church of San Pietro Apostolo with interiors of precious marble and wood and a beautiful eighteenth-century organ. Other attractions include the Church of Santa Maria la Greca, the Civic Museum and the Palazzo dei Balì, once the seat of the Knights of Malta.

If you love nature and exploration and are struck by the spectacular paths between stalactites and stalagmites, we recommend that you visit the Trullo caves.

A must to be there at the winter and summer carnival!

Do you want to taste the typical dishes of Putignano cuisine? book your table now!