Where is Casamassima located?

Casamassima is located at the foot of the Murge, with an average altitude of 230 meters above sea level. The highest level is near the area known in the Casamassima dialect as “Vie de Cardal” and the lowest is near via Conversano and the commercial district. The area is characterized by very fertile soils and by the presence of the Lama San Giorgio river, which runs along the Marced wood. Casamassima is adjacent to Turi, Adelfia, San Michele di Bari, Acquaviva delle Fonti, Noicattaro, Valenzano, Capurso, Cellamare and Rutigliano.

What to see in Casamassima? 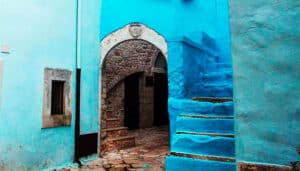 Casamassima is a town in the metropolitan city of Bari, in Puglia, and is part of the club of Authentic Italian Villages. Casamassima is also known by the nickname of “Blue Country” for the color of the houses and monuments of the historic center. Built in Roman times, Casamassima stands at the foot of the Murge, at an average altitude of 230 meters above sea level.

The Monastery of Santa Chiara is the most impressive building in the historic center and was founded in 1573 by Antonio Acquaviva d’Aragona. Another notable building in the ancient village is the Palazzo Amenduni which is located near via Castello.

Among the most loved and photographed glimpses of the blue town are Via Paliodoro, the bluest street of the village with numerous peasant houses largely restored and embellished with flowers and traditional objects, and Chiasso Bongustai, which you meet going down the characteristic via Sacramento, one of the most evocative noise, in which there was the ancient oven of the Duke. Today it is all painted in light blue and this coloring makes the place particularly attractive.

Among the traditional events, in the month of October there is the historical parade “Corrado IV” which more recently was accompanied by the Great Feast of Flavors.

Do you want to taste the typical dishes of Casamassima cuisine? book your table now!

What to do in Casamassima?

The Casamassima Commercial Park combines leisure, shopping and entertainment for the whole family. The 110 stores offer the most interesting brands of clothing, accessories, products for the home and personal care. There is a well-stocked refreshment area where you can relax with friends while sipping a delicious coffee or tasting a specialty, a children’s area with games and activities for children of all ages and, of course, a large supermarket with a wide choice of daily shopping.

Visit our B&B in Casamassima where to stay in order to visit it.

The history of Casamassima:

Founded in Roman times, the oldest official document concerning Casamassima which has come down to us is a little later than the Cassinesi placites, which are dated between 960 and 963. It concerns a morgengabio, which according to the ancient Lombard custom specified the part of the goods that the husband gave to his bride the day after the wedding night.
In 962, in Casamassima, Sikeprando and Eregarda, spouses, sell a piece of vineyard to Kalolohanne for the price of five soldi of Constantine, the woman cum consensu and voluntate of her brother Garzanito and of the relative Kolahure sells the fourth part of her morgincap.

Choose your home! to sleep near Casamassima in a B&B with swimming pool. 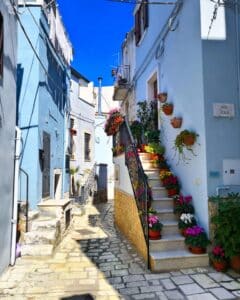 The document, preserved in the archive of the Cathedral of San Sabino, in Bari, is one of the few existing traces that attest to the presence of Casamassima as a well-organized community at the end of the 10th century.

For centuries Casamassima lived under the dominion of many Puglies lords and grew in importance, always depending on the lords of nearby cities, such as Conversano and Acquaviva delle Fonti. The castle in the historic center of Casamassima is a testimony of this period.

The ancient village is medieval, having risen around a Norman tower of the eighth century it was later enlarged into a castle.

Where to sleep in Casamassima?

Do you want to visit Casamassima and save on the price of the B&B? Check our availability and ask for a discount!

To admire the “blue village”.
The historical facts about the plague have been interspersed with layers of legends, one of which tells that Michele Vaaz, lord of Casamassima, made an oath to the Virgin Mary who protected the city from the plague that had spread in the area and that the historic center turned blue after overcoming the epidemic crisis. It is said that as a sign of gratitude the Duke of Vaaz ordered to cover the building with quicklime and to add the blue of the Madonna’s cloak, which today adorns the arches of Via Santa Chiara.

Visit our Bed & Breakfast Casamassima where to stay in order to visit it.