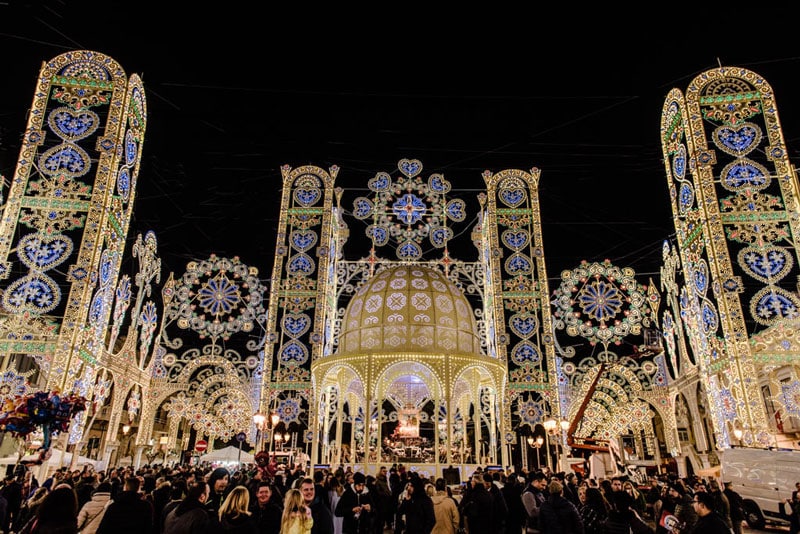 Adelfia is located close to the first slopes of the central Murge about 13 km from the capital, the municipal area has an area of 29 km² reaching the maximum altitude of 231 m s.l.m. in the territories bordering Acquaviva delle sources and a minimum of 103 m a.s.l. in the territories bordering Bari. The municipal territory borders to the west with Sannicandro di Bari, to the north with Bitritto, Bari and Valenzano, to the east with Casamassima and to the south with Acquaviva delle sources. The dominant landscape is absolutely composed of vineyards, olive and almond trees are also very common, in the offshoot of territory that wedges inwards it is not uncommon to also meet downy oaks.

What to see in Adelfia?

The architectural heritage of Adelfia can boast a singular duplicity, starting with the existence of two different historical centers, which arose at a very short distance from each other and developed in the same period (around the year 1000), but remained until the beginning of the twentieth century separate entities, each with its own noble palaces, with its own administrative headquarters, with its own religious traditions, with its own churches and patron saints. The stele located on Corso Vittorio Veneto near the current town hall marked the ancient boundaries. Once behind, in the Catella property, there was the boundary stone.

The main historical and architectural testimonies can therefore be ascribed now to Montrone and now to Canneto.

Anyone who has passed through Adelfia at least once, surely, will have noticed a sign at the entrance of the town that reads Adelfia Regina dell’Uva and this writing is by no means an exaggeration, as in this small Apulian village it is possible to find many vineyards which produce the so-called Uva Regina.

Basically it is a very precious table grape and, in the summer months, the young people who dedicate themselves to the tiring work of the grape vine are mainly involved in examining the unripe bunches and eliminating all the smaller grapes, as in this way those bigger can continue to grow even more.

In addition, at the end of September you can also attend the traditional Grape Festival, where all the vineyards compete in a foot race in which the winner is whoever owns the largest bunch of grapes and, for this reason, it is even possible to be able to see large bunches of about 4 kg.

What to do in Adelfia?

The barrels resound, the earth trembles and the sky shines. It’s like being shaken by an earthquake. But seconds later, countless multicolored confetti falls from the sky. Like a Rossinian crescendo, the firing of the fireworks intensifies the rhythm, giving the audience the feeling of being in a hell and a paradise studded with burning and destructive stars and stripes.
The pyrotechnic metropolis of Puglia’s festivals: Montrone, which together with Canneto constitutes the municipality of Adelfia, celebrates its patron saint, San Trifone, with the largest fireworks festival in Italy. Also this year Adelfia for three days turns into the capital of fires. Counterbombs with cannoli, with the cross in the center, bomb combined with 32 scale shots plus backlash, so-called “stutate” bombs, decree the winner among the numerous stokers who come from all over Italy, give life to a scenography that leaves all the spectators, experts, connoisseurs and simply curious with the nose up for over two hours.
If it is true as the saying goes that “not all evils come to harm”, from the invasion of locusts in 1783, which San Trifone wiped out, saving the crops, one of the largest religious and popular festivals in Italy was born. . In the role of a Roman soldier with a lot of armor and a spear at the tip of which a grasshopper is impaled, the statue of San Trifone is venerated in the church of San Nicola in Montrone. Sacred and profane mix together to create a party that brings together people from all over Puglia, but also from Italy around tables set in the courtyards of the historic center. Grilled lamb, cold cuts and good wine: the traditional ingredients of the popular festival are all there. Gourmets and devotees, but also lovers of good music who have come from all over to listen to the symphonies of the bands, look forward to next year.

The agricultural industry is also thriving. Although the country has experienced constant migration since the beginning of the century and many people have returned, many still remain outside the country, enjoying old age as a matter of fact, but without forgetting their origins.

We remember them with affection and emotion on what has become an annual day of migrants (three days at the end of August). For some years it has been established that the great honor of bringing the patron saint on 11 November (the day after the holidays) belongs to the various migrants who participate in the celebrations.

For some time the city has attracted more and more people who decide to settle in the municipality, both from neighboring countries and from Bari itself, thanks to its tranquility and the tendency to live on a human scale.
In the nearby suburbs, an infinite number of table grapes grow, nothing short of excellent. Until recently the main producers were Regina and Primus, but now the focus is on the cultivation of Italy and Inzolia.

Someone continues to produce, for his family, Baresana and Primitivo grapes (the latter to obtain an excellent slightly alcoholic wine), and olives for a genuine oil without any acidity.

Unlike those who say (the inhabitants of the CANNETO district), the boundaries between the two districts MONTRONE and CANNETO, those of 1927 that divided the countryside under the parish profile for the rural surveillance, for the cadastre (it is only a few years that said cadastre has unified for the whole town) are not given by a NORTH-SOUTH perpendicular to the bridge, located on the Montrone stream, but coincide with the Stele located on Corso Vittorio Veneto near the Municipal House (once behind, in the Catella property, it was located a FITTA aut boundary stone).

The main economy of ADELFIA is agriculture, the typical products are mostly “products of the earth”, especially table grapes (such as Regina, Italia and Inzolia), wine (typical Primitivo Apulian strong alcohol content) and olive oil.
On the day of San TRIFONE the customer is involved in a sort of “Lamb Festival” where you can taste excellent “scottadito ribs” as well as the so-called “‘nghimmiredde”, always made of lamb at the rotisseries set up on the street. , accompanied by a good glass of local wine (the Primitivo).

Where to sleep in Adelfia?

Adelfia is one of the most curious cities of Puglia, absolutely singular and decidedly unusual in its features. Because Adelfia is a double city: characterized by two historical centers, two dialects, two Mother Churches, two post offices, two schools, two Patron Saints and, of course, two patronal feasts!