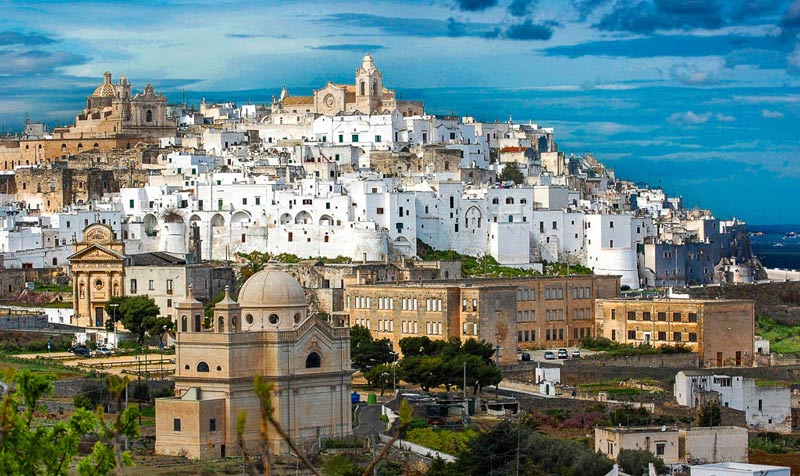 Ostuni is a panoramic city of great class, every house a belvedere, every restaurant a beautiful view, every window a poet overlooking the plain under the olive trees that change color with every breath of wind. The houses of Ostuni are white, made of milk and lime, so white that it hurts the eyes. Doors and stairs are white, everything is incredibly white.

Where is Ostuni located?

Ostuni stands on three hills at a height of 218 meters above sea level. It is located 7.5 km from the Adriatic coast. The Murgia, on which the south-eastern hills the city is located, is a karst area consisting essentially of Cretaceous limestone. It is therefore a rather arid area with no streams: in their place the so-called “lame”, seasonal torrential beds, with shallow furrows and steep walls. Another geological feature of the area are the “ravines”, karst ravines.

The most important economic activities are tourism and agriculture (especially olive trees and vines). Important and numerous are the presence of structures called “masserie”, or ancient fortified farms present both in the Ostuni forest and in the marina, where the agricultural activities of the large landowners took place.

What to see in Ostuni?

The white will guide you along the roads that wind through ancient olive groves, up to the hill on which it is perched and will dazzle you when you arrive. White is the labyrinth of streets and whitewashed walls in which you are happy to get lost. Ostuni is an Apulian city, in the province of Brindisi, which can be admired and fascinated!

In recent years, the local cuisine has garnered national and international accolades for its energetic dishes that make the most of seafood and the countryside.

The products of the sea are many and varied, made of simple Adriatic products such as sea urchins, molluscs, mussels, octopuses, anchovies, sardines, mullets and cod.

Absolutely to taste the arracanate anchovies, the ‘ncaprata, a poor dish based on cream of broad beans with the addition of chicory and turnip greens, the mint omelette, the brasciole, rolls of slices of meat stuffed with ham, parsley and pecorino au gratin. And then, of course, the orecchiette with turnip tops, the pan of potatoes, rice and mussels and, finally, the taralli seasoned with pepper or fennel seeds.

Do you want to taste the typical dishes of Ostuni’s cuisine? book your table now!

What to do in Ostuni? 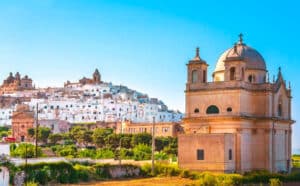 Ostuni, the White City of Salento, is located in the province of Brindisi at more than 200 meters above sea level, on the last offshoots of the Murgia area.
This white jewel of Puglia is one of the most famous places in Salento together with Santa Maria di Leuca, Otranto and Taranto.

Why is Ostuni called the White City?
It is easy to imagine that Ostuni is called the “white city” due to the color of most of the town houses, especially in the historical part. In reality, the reason why white was chosen is less poetic than looking at this little gem of Salento from afar. In fact, the city of Ostuni was attacked by the plague so many times that the walls were sterilized and made sterile by covering them with lime. The historic center of Ostuni, defined by its inhabitants as “The Earth”, was once completely painted with white lime, which today only partially remains. The houses climb the steep sides of a hill and the village is characterized by a tangle of winding streets, a succession of squares, alleys and courtyards. The lower part of the village is surrounded by the ancient city walls in which the only two intact entrances to the city are set: Porta Nova and Porta San Demetrio.

On the top of the hill stand the fifteenth-century Cathedral of Ostuni with its large 24-spoke rose window, the Bishop’s Palace and the old Seminary.

The Museum of the Preclassical Civilizations of Southern Murgia
Along via Cattedrale, near the baroque church of Santa Maria Maddalena, there is the Carmelite monastery. In this historic structure stands the Museum of Preclassical Civilizations of Southern Murgia which preserves the cast of Delia, a pregnant woman who lived 25,000 years ago and was found in a cave near Ostuni in 1991, as well as evidence of female cults and divinities from the Paleolithic to the Christian age. 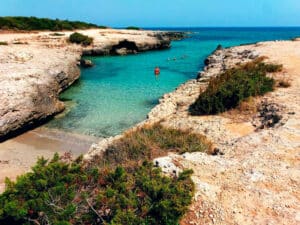 The beaches and the seaside resort
Along the 17 kilometers of coastline of the Ostuni area, in a wonderful play of colors, there are long beaches with dunes covered by Mediterranean scrub and an alternation of sandy coves and rocky coast. The coast today represents one of the places of greatest tourist seaside attraction in Puglia.

Do not miss Rosa Marina, a succession of small sandy beaches, between the Mediterranean scrub, Monticelli where you can find a quiet and familiar atmosphere and Costa Merlata, so called for the extremely jagged coastline, with the sea that creeps between the ravines of a rocky coast forming unique and intimate sandy coves.

The Salento farms
In the countryside surrounding the city there are numerous farms, many of which have been transformed into farmhouses and luxury resorts. Two perfect examples are Santa Caterina with its octagonal tower and Cappuccini with its typical Apulian trulli.

How to get to Ostuni
The city of Ostuni is located about 80 kilometers from Bari airport and 15 from Brindisi airport. The train station is located 4 kilometers from the city center, connected to the White City of Puglia by a bus service.

Choose your home! to sleep near Ostuni in a B&B with swimming pool.

It is the main fraction of the so-called “Marina di Ostuni” which extends from the Natural Park of the Coastal Dunes (in which there are Lido Morelli and Lido Bosco Verde) and the adjacent hamlet of Pilone, up to the hamlet of Santa Lucia – Torre Pozzella. This stretch of coast includes the well-known tourist resorts of Rosa Marina, Monticelli, Diana Marina, Gorgognolo, Costa Merlata and Cala dei Ginepri.

Villanova has a marina at the foot of the low fourteenth-century fortress castle, a nineteenth-century church and numerous beaches. The port area is the central nucleus of the country which also includes the areas of Camerini and Fontanelle.

The history of Ostuni:

The first city nucleus was founded by the Messapi, an ancient Illyrian or Anatolian population who settled in Salento in the seventh century BC; the Messapi were skilled builders of roads and cities and chose the location for the city on top of a hill with very steep walls (murex in Latin, from which the term Murgia comes precisely) very interesting from a strategic point of view. Recent excavations near the Boarium forum (the area facing the medieval walls), have allowed the discovery of tombs of the IV – II century BC, which document the presence of an inhabited center, the extension of which went from the sides of the hill to the sloping plain towards the sea.

In the third century BC. Salento was also conquered by the Romans and with it the city. The sources say very little about the period, probable traces remain in some farms, built on the foundations of ancient villas. Little is also known about the etymology of the word Ostuni: it probably derives from the eponymous hero Sturnoi, companion of Diomede, who would have founded it after the Trojan War; later the Romans called it “Sturninum”. However, the term could be mediated from the Messapian or more probably from the Greek

With the disintegration of the Western Empire, Ostuni, like the rest of Italy, was crossed by Ostrogoths, Lombards, Saracens and strenuously defended by the imperial power exercised by the Byzantines. During the Byzantine period, in 876 it became a diocese and gave refuge to the Basilian monks from Syria and Egypt; threatened by Arab expansion, but above all by iconoclasm, the monks took refuge in the same caves that had given refuge to prehistoric men. Between the eleventh and twelfth centuries the Normans conquered the Byzantine settlements in Puglia, unifying them under the county of Puglia established by Roberto il Guiscardo and then becoming the Duchy of Puglia. The Normans also intensified the cultivation of the olive tree and set out precisely the boundaries of the city.

From the second post-war period to now, alongside the development of agriculture and the related processing industry (olive oil, almonds, wine), the city has become a renowned tourist destination, managing to enhance its cultural, historical and architectural. Numerous tourist villages, such as Rosa Marina, of international importance, have sprung up on the coast, one of the cleanest on the Apulian coast. In 2006 it was established on the coast that borders the municipality of Fasan or the Regional Natural Park of the Coastal Dunes from Torre Canne to Torre San Leonardo, a protected area of high naturalistic and landscape interest.

The most peculiar feature of the historic center, which fascinated tourists so much, was the whitewashing of the houses up to the roofs. The use, attested since the Middle Ages, derives not only from the easy availability of lime as a raw material, but from the need to ensure greater brightness in the narrow streets and environments of medieval plant, given by both direct and reflected light. As already mentioned, this custom also played an important role historically in the seventeenth century, when lime whitewashing was the only way to prevent the plague from spreading in the town and the contagion increased until it led to its destruction.

This practice, now in decline so much so that the mayor had to issue an ordinance to make it come back into vogue, meant that Ostuni was called the White City or the Nativity City, and it was a feature that made it recognizable and unforgettable to visitors.

Visit our Bed & Breakfast in Ostuni where to stay in order to visit it.

Where to sleep in Ostuni?

Do you want to visit Ostuni and save on the price of the B&B? Check our availability and ask for a discount!

Ostuni not only takes you for a walk in the history of its rulers over time, but also boasts an unspoiled nature rich in vegetation and animal species.

Visiting the Coastal Dunes Park will allow you to immerse yourself in the typical Apulian landscapes, among centuries-old olive trees and ancient farms.

Before returning home, we recommend another stop in a naturalistic key, the protected area of Torre Guaceto, WWF Nature Reserve. It is half an hour from the city of Ostuni, but its 1200 hectares of vegetation and fauna are worth the detour.

Visit our B&B in Ostuni where to stay in order to visit it.